Time magazine startled us in June of 2014 when it published a cover article titled: “Eat butter. Scientists labeled fat the enemy. Why they were wrong.” After fifty years of deprecating saturated fats, scientists finally confirmed that butter is not the enemy but should be an essential part of our diet. The article concludes that the hypothesis that a diet low in saturated fats lowers levels of heart disease is inconclusive, since the relationship between saturated fat and cardiovascular disease has not been confirmed and remains tenuous.

So, butter is good, but ghee is even better! Because of its milk solids, butter is more prone to causing blockages, sluggishness, and weight gain. It is not so with ghee, as it is clarified from butter’s clogging elements.

You may be asking, “Is all that resultant fat really good for my arteries?” The answer is yes! And thank goodness not all fats are created equal. Ghee is comprised of mainly short- and medium-chain fatty acids—the good kind of fats that our brains and cells need. The saturated fat from ghee also keeps the digestive environment well lubricated, maintaining a balanced metabolism on each level of digestion. When cooked with spices, ghee becomes the best medium or “vehicle” to deliver nutrients to the deepest levels of our physiology, resulting in a sense of satiation and nourishment. Many students in my cooking classes have experienced how they feel satisfied with a seemingly smaller meal—all because we cooked it with ghee (and love)!

Just as with milk, not every ghee is the same. The ghee glorified in the ancient texts centuries ago was derived from the cultured cream of unadulterated milk coming from happy cows that roamed in pastures of a clean environment.

Cultured ghee from grass-fed and pasture-raised cows is one of the highest sources of conjugated linoleic acid (CLA) on the planet. Studies confirm that CLA boosts immunity, supports healthy liver function and helps the body burn fat and lose weight (if necessary).

Today we see drastic changes not only in the environment and the methods of dairy farming but also in the condition of our livers and their ability to digest and metabolize fat. Most adults’ livers today are overwhelmed from toxins due to stress, environmental pollution, and the consumption of processed and artificial foods, pharmaceutical drugs, and whatnot. Because of that some scientists have concluded that ghee increases cholesterol and inflammation. While the scientific debate about saturated fats continues, more and more findings confirm the ancient wisdom found in Ayurveda about the benefits of cultured ghee. 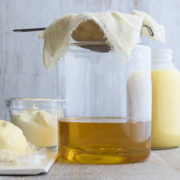